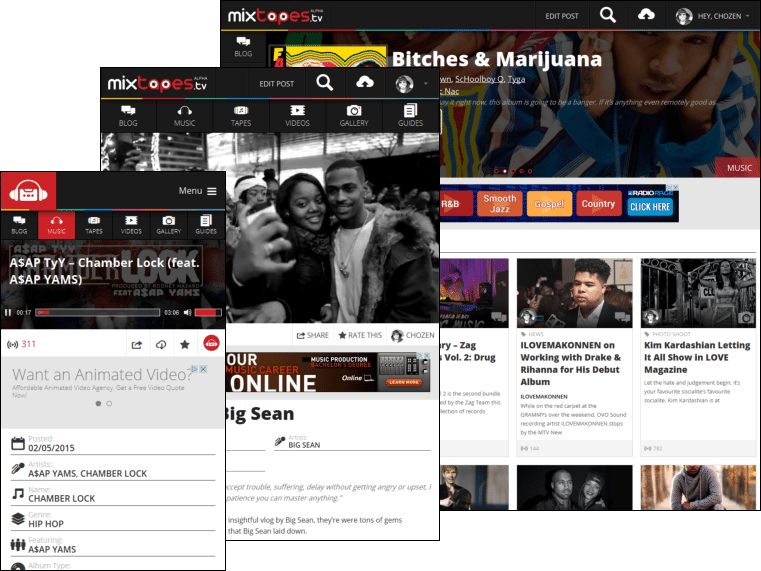 For 5+ years Mixtapes.tv has been the official source to download mixtapes, now we’ve launch a  brand new plus service called MixPlus, for members who would like to improve their already awesome experience on mixtapes.tv

Some of the things that have separated us from a lot other mixtape, is that most of our tapes are official, all have artwork and the tracks are all titled correctly. We deal directly with the artists and DJs to get the very best selection of music.

Since version 2 of the site is still very much new, we’re still working on tons of new features that as a Plus member you will be the first to experience, one of them is the new video download function that will give you the ability to download music videos, short films and much more.

Our goal is the create the first full fledged urban premium platform out there, but we’re going to need your help.

So even though right now you’re simply downloading mixtapes, videos and playlists faster, that’s not all there is to it, that’s just the beginning.

You’re more than a member, you’re a partner and that support will help us to become bigger, better and more bad a*s when it comes to bringing you the best in urban entertainment.

Plus members can listen to mixtapes all day long and are able to download 3 mixtapes per day, but once they've reached there limit they’ll need to wait until the next day before they can download more mixtapes and the download speed will be limited. Plus get unlimited download 10x faster.

Lets honest not every mixtape is a good mixtape, some mixtapes might only have one track that’s worth the time of day, so why download the whole thing just to get that one song? Plus members will be able to download unlimited individual tracks.

OK so the mixtape isn't that great but hey there’s about 6 tracks on the mixtape that you feel have some replay worthiness, why download them one at a time? Plus members can select the tracks they want, forget about the ones you don't care about and download them all at once.

(Coming very soon) Do you have a iPhone, iPad, iPod Touch, Android or Windows phone? Well in the near future we’ll be releasing some really cool apps that allow you to listen to all the mixtapes on your phone without downloading the mixtapes.

(Coming very soon): There is no site out there where you can download unlimited urban DVDs, videos and more without paying for each individually which would cost you anywhere from $5.00 to $20.00. Premium members will be able to download unlimited DVDs.

(Coming very soon) As a Plus member you’ll be able to create your own custom playlists, choose from the thousands of mixtape tracks, add them to your own playlists. Expect to see this feature released before the summer and it will be exclusive to Plus members.
Best Value

If those features are not enough then you can simply do it to support the site,  if you're a fan of the site and you’d still like to see it be around 5 years down the line then help us cover administrative costs for streaming and hosting, because it's certainly not cheap - we'd greatly appreciate the support. Much love!!!